I have recently been commissioned by a couple to make a cut of Jesus Lock in Cambridge. Its a place I have always loved as its got a wonderful mix of architectural and scenic elements - a bridge, a lock, the wonderful river, a gorgeous lock cottage and that's not mentioning the amazing sight that's Jesus Green trees, the trees that give a cool walk on a summers day. Its a tricky place too for that very reason. In that having so many strong elements, its hard which view to translate or which elements to concentrate on. I chose this sight as it combined all the details the couple wanted, and somehow captured the sense of the place too.

And its partly where the development of my work is going. This isn't really a paper cut. Its a layered collage. The surface is cut, but then I underlay paper from behind to fit the spaces exactly and then I cut into them again. I also used the blade to cut into the surface to add a cut texture.

It makes for a dense and richly coloured piece... and I am pleased with I have to admit. Especially with the graph paper clouds and the 7mm phone boxes! 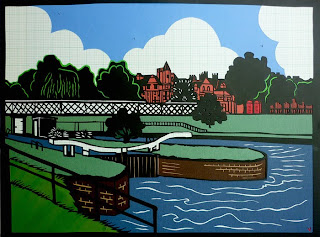 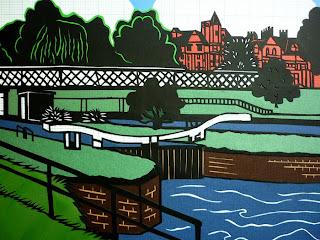 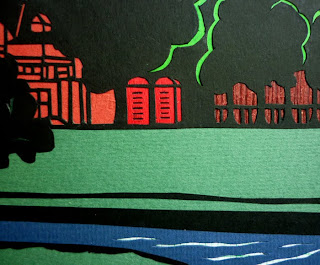 So I couldnt sleep last night....thoughts running round my brain like rats in a sack!

I just couldn't sleep last night. I had had a deep bath at 10pm ish, mainly to soothe my shoulder. I have been in pain all week, not being able to turn my head easily and it hurting like anything. I love being in the bath. I simply love it. Its the place where I can separate off from the family physically and mentally and its the place I always let my imagination run free. The water was so warm and it helped me forget the pain for a while.

Anyway, after turning pink and wrinkly, I got out and dressed and made a cuppa and then started to write down the ideas. There were so many tumbling over each other like rats in a sack. A few things I had been dithering about seemed at long last to just make sense - things about using text and poetry and capturing the experience of being in a place and not just the physical scene. On the telly was the Santana programme on BBC Four, and as I wrote I had that music keeping me company. The way I had got to know Santana, and that was only a smidge of knowledge, was through my brother-in-law who was a mad keen Santana fan. He bought me a Santana album when I was about 15, pretty cool looking back now.

It was so good to enjoy the moment of getting the thoughts down. Getting them out of my head. And I experimented a tiny bit too. An inch sized experimentation of a little teacup, combining gouache painting and a paper cut. I actually really love it. I have felt such a need to paint, to work with subtle colors and tones and have the freedom of the brush and not the blade. The blade though is so definite,so clean to use, I can't imagine a time when I would want to stop.

Still, this is for you to see... very early green shoots of change...

Too much visual noise and taking the fork in the road

For several months now I have been feeling twitchy about my work. I can't pinpoint the exact moment it started, it was more of a sense that it's the end of an era and the start of another. Things have been difficult at home - children finishing Primary school and a father disappearing further into Parkinson's inevitably have lead me to ask questions about who I am and where I am going. It's the typical mid 40's angst I suppose. And a lot of that questioning has been about who I am as an artist. I have looked to other artists work to get a sense of myself, looked at exhibitions to inspire me - generally been on the hunt for some signs to tell me the right way to head now.

Only it's not very easy.

On Facebook I am a member of a few groups and pages that feature the work of artists, especially paper artists. Every day in my feed there is a steady stream of work to look at and be inspired by. It's a medium that's growing more and more fashionable and popular. I'm not surprised really. The materials needed are very easily available, you don't need a large workspace and the immediacy of the medium means you can get good results quickly especially if you employ Photoshop and a printer, both of which I don't use in the making of my paper pieces. Paper has an inherent democratic humility to it - at its roots paper art comes from the people, from crafts pieces made by the people and not the product of a Salon, so it's a medium that's relatively easy to grasp and get immersed in.

Like everything though that becomes fashionable, you just seem to see more and more of the same kind of thing. And that's happening to paper cuts, especially the silhouette type. They are appearing all over the place from John Lewis ads to the London cityscape background that the BBC uses for London based interviewees. And Rob Ryan's work that started the ball rolling with his poignant and delicate white and red paper cuts that have now come to be seen almost everywhere from tea towels to mugs to notebooks. Its brilliant that his work is so well used, and I do love his work, but the old maxim of " too much of a good thing" rings true. There are many imitators out there, and in some small way I have been one of them, but maybe with a female perspective twist on what I have produced. My Facebook feed is full of wonderful things but also a lot of the same kind of stuff. Much of it that's technically masterful, amazingly decorative and detailed and yet somehow feels without much meaning. And everyone is wanting to be noticed, wanting to say "look at me, look at me" and I too am doing the same thing - it's impossible to think that Twitter, Facebook, LinkedIn et al can be ignored, they are essential marketing tools in our commercial world today.

It just feels however like there is too much noise. Visual noise. I think I will go against the tide and not look at what's out there, just for a while.

So.... what's the solution? for me it's time to change, time to develop some experimental work. I still want to cut my buildings, still want to make cuts that express the England I see, but I want to do work that's different to anyone else.

Time to take that fork in the road.

I am working on a commission for the next three days, for a couple that want a cut of Jesus Lock. So I went to Cambridge today, to look at the place, take lots of photos to prod my memory for when I am back home in the studio. Its been such a beautiful day. A perfect temperature to wander around and enjoy the sights of an English town - filled with tourists and families, friends and couples out and about, shopping and chattering and walking dogs. We sat under a bench under the trees and it was a little slice of heaven. And I managed to take a picture that captured a second of the time there. 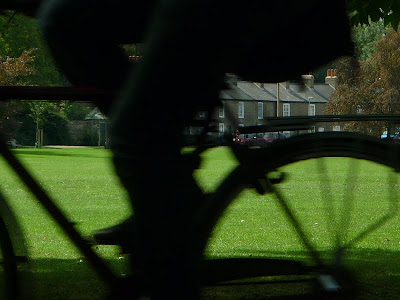 Posted by Vanessa Stone at 09:26 No comments:

I have made some smaller, more affordable, sunny windowsill cuts for Byard Art and delivered them just a few days ago. They are framed in Acrylic black frames, so look very simple and crisp, and depict some classic Cambridge icons of punts and Kings Chapel. I actually love doing these smaller cuts. They are so simple and somehow much more intimate. I suppose because you can hold them in your hands, they are meant to have near you.

To get more information about sizes and prices simply click HERE 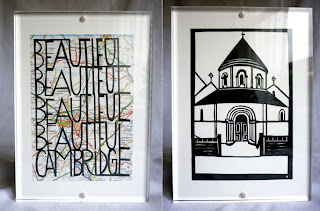 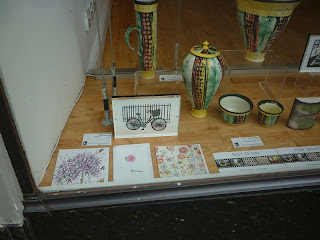 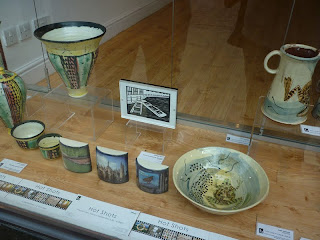 Posted by Vanessa Stone at 09:13 No comments: